While we follow strict editorial guidelines, this article may contain affilate links to our partners who may compensate us if you click and make a purchase. Learn more about how we make money.

Is there a difference between being rich and being wealthy? The answer is yes.

We often interchange the words rich and wealthy, but the truth is being rich and being wealthy are somewhat different.

Rich people are those who generally make a lot of money and spend a lot of money. Another way to look at being rich is that rich people lose their ability to live their current lifestyle if they lose their primary source of income, usually their job.

But, on the other hand, wealthy people never have to worry about money because they’ve built up so much wealth that they have enough money to last them the rest of their lives, and possibly the lives of their children and further descendants. This is generally because wealthy people have multiple streams of passive income that fund their way of living, even if they’re not working.

What's In This Article

What Does It Mean To Be Rich

When it comes to being rich, think of high salaries and high spending. A rich person may be a lucrative businessman in a big city, a doctor, lawyer, or other highly paid professional who lives in a big house, drives a fancy sports or luxury car, and travels a lot.

Rich people don’t always have assets that earn them more money. Instead, they may earn large sums of money and may use their money to buy possessions and have experiences. When someone wins the lottery and immediately buys a whole bunch of things, we consider them rich.

A rich person generally doesn't have financial freedom. Their financial well-being is dependent on them continuing to earn a high income so that they can support their expensive lifestyle.

Some rich people go broke down the road. According to NEFE, 70% of lottery winners end up going bankrupt. As rich as they became winning the lottery, they could not properly manage their money, and they ended up losing everything they had won.

Here are some more attributes of a typical rich person:

CDs are one of the safest forms of passive income.

Take advantage of this low-risk stream of income by opening a CD today. What Does It Mean To Be Wealthy

A wealthy person has come to the point where their money has bought them time. For wealthy people, they no longer have to worry about money, as they have enough of it to have reached financial freedom.

Wealthy people buy up assets and make their money work for them. They may own real estate, stock, businesses, and other assets that build sustainable wealth. In addition, they may have several sources of passive income that keep them afloat regardless of what curveball life throws at them.

Invest in Real Estate With As Little As $10

Fundrise makes the historically high returns of real estate accessible to just about any investor. Start with as little as $10.

Affiliate Disclosure: This is an affiliate link and we may earn a small commission if you click and make a purchase. This helps our site grow and provide you with more content. Read our full disclosure here.

Wealthy people generally have little to no debt, live within or below their means, and have portfolios of investments that allow them to live comfortably now or at retirement.

A typical wealthy person will have passive income to keep them going, so that working has become optional.

One way to look at being wealthy is: If you have enough money to live off of the rest of your life without having to work – that is enough passive income to last you for life and that your wealth would not deplete – then you can consider yourself wealthy.

Common attributes of wealthy people include:

Acorns: Invest Automatically Whenever You Swipe Your Card

Every time you purchase something, Acorns rounds up the transaction and invests the difference.

Grow your wealth on autopilot.

The Differences Between Rich and Wealthy

When it comes to rich vs. wealth, the main difference is that rich people have a lot of money, but their lifestyle depends on continuing to make the money that they do. On the other hand, wealthy people have enough money not to have to worry about it.

Rich people generally spend a lot of money, whereas wealthy people do not. For example, a rich person may have an extravagant house, several cars, and have expensive habits. On the other hand, a wealthy person may have a simple home, one or two cars, and find joy in doing low-cost activities with friends and family.

Rich people’s lifestyles can be hindered by the loss of their paycheck. On the other hand, wealthy people have diversified income sources and are cushioned in case one is lost.

Get Exclusive Access to Private Market Investments on Yieldstreet

Yieldstreet is an alternative investment platform focused on generating income streams for investors. 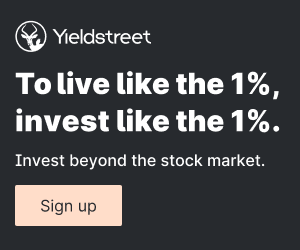 Many rich people show off that they’re rich, whereas it’s common to have no idea that a person is wealthy. Many wealthy people wear typical t-shirts and jeans, drive common cars, and live in modest homes. Rich people are more likely to wear fancy clothes, drive expensive cars, and live in lavish homes. Find out how to look and act rich on a budget.

How To Become Wealthy

Being wealthy doesn’t mean having a specific amount of money. Instead, it means having enough money and income that you no longer need to worry about your money in general. There are several ways to walk down the path of becoming wealthy, even if you don't have much now.

Save as Much Money From Each Paycheck as Possible

If you struggle to save money, consider incrementally saving more money each month. Start with whatever makes sense to you, and then increase your savings as best as you can.

Financial experts generally agree that saving and investing a minimum of 10-15% of your monthly income is wise. Those who want to retire at an earlier age or accumulate wealth faster will want to raise this significantly higher.

Pay off All of Your Debt

Wealthy people have little to no debt. In your journey to become a wealthy person, focus your energy on paying off all of your debt, especially bad debt such as credit card debt, personal loans, auto loans, and student loans.

Check out this article for tips for paying off debt. Once you’re out of debt, you can start investing, which will build wealth over time.

Invest Your Money for Your Future

When you have your money invested in assets that pay you regularly, you build sustainable wealth and passive income. An example of this is when you buy stocks that pay dividends. The stocks grow over time, and the dividends pay you monthly or quarterly.

Diversifying your investments make sense. For example, you may have money in the stock market, money in peer-to-peer lending, money in real estate, and money in a business you own.

Automate your finances so that you can invest in your future incrementally without worrying about your money day after day.

Don’t Just Work a Job, Hustle on the Side

Wealth is built quicker when more money comes in. Consider picking up a side hustle to push your net worth higher. Those who pick up one or more side hustles may be able to replace their full-time job eventually should they desire.

Almost anyone can do a side hustle as some require a few hours a week, and some can be done with as many available hours as you have.

Get in a Wealthy Mindset

Being wealthy is a mindset. It means living within or below your means, saving and investing regularly, and keeping debt to a minimum. You won’t spend your money on things you don’t need, and you’ll look for ways for your money to make more money for you.

You’ll stop trying to keep up with the Joneses and instead focus on your nest egg. You’ll remember that sacrificing some fun now will help you have more wealth later, which will create a more comfortable life for you and your loved ones later on.

In this article, we discussed the notable differences between being rich and wealthy as well as how to obtain wealth. Living a rich life is completely acceptable if you earn enough to support it, but with that in mind, building wealth and never worrying about money is certainly appealing.

What have you done to help yourself build wealth?